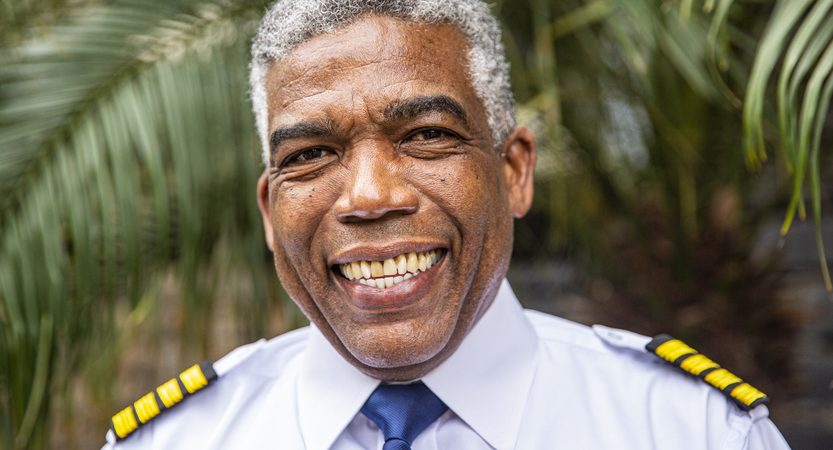 One step at a time

In the early 1980s, on the small caribbean island state of Antigua and Barbuda, a young boy named Charlesworth Hunte was navigating an improvised toy aircraft attached to a string. Little did he know at the time that he would become the first pilot to transport a sitting United Nations Secretary General on a Dash-8Q400 to the remote camp of Dadaab in Kenya. However, Captain Hunte’s aviation story does not begin with flying. During his time at a technical college, he noted plenty of advertisements in the local newspapers on aviation courses and jobs. Under the instruction of his technical trainer, he decided to pursue an Airframe and Powerplant Technician license (A&P). After two years in Oklahoma, United States, Hunte came back to his country as a certified A&P technician and immediately joined the national airlines. For the next four years he conducted duties such as line maintenance and hangar maintenance. Crippled by a paralyzing sense of stagnation and lack of career growth, Hunte felt it was time for change. It was at this point that he made the journey that would transform him professionally to excel in what he is currently known for, flying. He joined a Canadian flying school and by 1990 had graduated as a pilot but continued his work in maintenance for two more years. At the onset of 1992, Hunte officially joined the national airliners as a first officer, a position he occupied for the next eight years. In 2000, he was promoted to Captain at a different local airliner with all his experience on the Dash 8 series. As the globe was bracing for the economic recession of 2008, Antigua and Barbuda began feeling the pangs of economic decline earlier in 2007 and the local airliners began shutting down one by one. And so it was that Captain Hunte landed in Kenya during the cold season of July after securing a position with a leading aviation company. During his time in Kenya, Hunte has recreated himself as a Training Captain, a duty that in his own words, has been “gratifying and fulfilling.” Hunte has also developed a new passion: drones. He has converted the servant’s quarter of his house into a drone workshop where he dismantles them, studies their mechanics and builds them again from scratch.
Translate »